Things to Do in Hilton Head: Burgers, Boys & Girls Club, and Big Plants 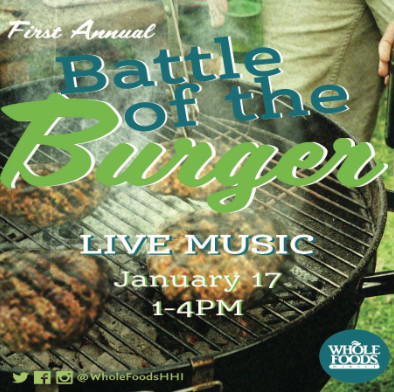 Looking for fun things to do? Check out local events happening in Hilton Head Island and Bluffton this week!

Westminster Concert Bell Choir, conducted by Kathleen Ebling Shaw, will present a concert of traditional English holiday music as part of its Twelfth Night Tour. The program will feature arrangements of such familiar carols as Greensleeves, Coventry Carol, Sussex Carol, Masters in This Hall, and In the Bleak Midwinter performed on the largest range of handbells and Choirchimes in the world.  The 16-member Westminster Concert Bell Choir is composed of undergraduate and graduate students of Westminster Choir College of Rider University. The ensemble has appeared on Public Television’s Mister Rogers’ Neighborhood and several holiday broadcasts of the TODAY Show.  Its holiday performances have been heard annually on National Public Radio’s Performance Today, and it is included on NPR’s Christmas Around the Country IIrecording. IN previous seasons, the ensemble joined Julie Andrews, Christopher Plummer, Charlotte Church and the Royal Philharmonic Orchestra for a critically acclaimed 15-city tour entitled “A Royal Christmas.”  The choir has also performed with Josh Groban on NBC’s nationally televised lighting of the Rockefeller Center Christmas Tree.

If you think the bigger the better, come learn about our large selection of big plants with floral designer, Wendy Porterfield. From Fiddle Leaf Figs to Bird of Paradise to Bamboo Palms, we’ll cover them all. The Greenery invites the public to these free, informative seminars. RSVPs are encouraged to 843-785-3848 or amymetzger@thegreeneryinc.com. A special discount will be offered in The Greenery Garden Center to attendees who make a purchase that day.

The Boys & Girls Clubs of Bluffton and Hilton Head Island will host the 2015 Hope & Opportunity luncheon from noon to 1:30 p.m. Friday, Jan. 16 at the Westin on Hilton Head Island. This year’s event will honor long-time Club supporter and champion of children, Susan Ketchum. Ketchum is a respected and successful financial advisor with Merrill Lynch and has been a long-time supporter of both clubs as well as several other non-profits during her nearly 30 years in the Lowcountry. The luncheon is open to the public. Tickets for the event are $75. Please call Liz Vallino with the Boys & Girls Clubs of the Lowcountry at 843-379-5430 ext. 233 or visit www.bgclowcountry.org for details on the clubs and how to get involved.

Which team has the best burger? Buy your favorite while enjoying live music by Whitley Deputy. Contact Abby Wirth at abby.wirth@wholefoods.com for more information.