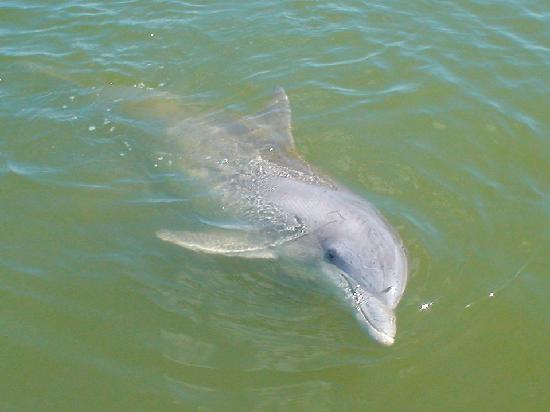 Hilton Head Island is home to many aquatic creatures, but one of our favorites is the bottle nose dolphin. Their curved mouths give the appearance of a friendly, permanent smile, and they very often like to come up and say hello to our local boaters.

Hilton Head Island’s Bottle-nose dolphins can swim up to speeds of over 18 miles (30 kilometers) an hour. They surface often to breathe, doing so two or three times a minute. Bottle-nose dolphins travel in social groups and communicate with each other by a complex system of squeaks and whistles. Schools have been known to come to the aid of an injured dolphin and help it to the surface.

Bottle-nose dolphins hunt their prey through the expert use of echolocation. They can make up to 1,000 clicking noises per second. These sounds travel underwater until they encounter objects, then bounce back to their dolphin senders, revealing the location, size, and shape of their target. When dolphins are feeding, that target is often a bottom-dwelling fish, like flounder. They also  like to eat shrimp and squid whenever it becomes available. These clever animals are also sometimes spotted following fishing boats in hopes of dining on leftovers.

The bottle-nose dolphins exhibit many behaviors that are unique to whatever part of the world they are in. One unique behavior that they exhibit only here on Hilton Head Island is strain feeding. The dolphins will herd and chase their pray onto the marshes and as the water flows back, the dolphins temporarily strand themselves onto the marsh and catch the strained- beached fish and then wiggle their way back into the water.

Best places to see our bottle-nose dolphins on Hilton Head Island is up the Broad Creek, behind Pinckney Island, or along the beaches when they are hunting fish. If you do see a dolphin, please remember that they are wild animals and to not feed them. We do not want to discourage their natural hunting behaviors or encourage them to come up to boats with the engine running.

Please note that feeding dolphins in the wild is illegal under the Marine Mammal Protection Act because the activity changes the animals’ natural behavior in ways that put them at increased risk of injury or death, and may impact their ability or willingness to forage for food.  It is also illegal to swim with or harass dolphins in the wild.[/notification]