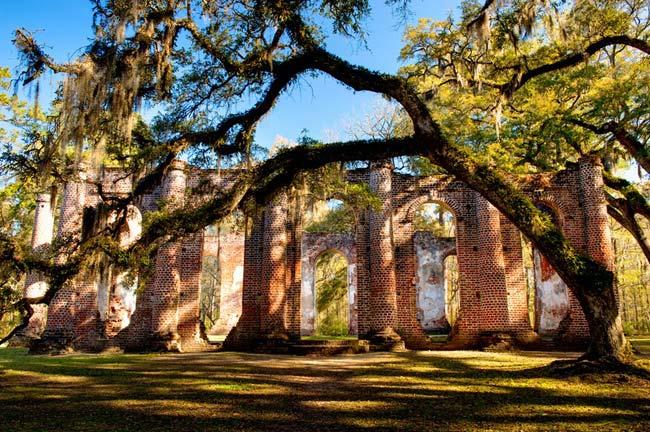 Sheldon Church has lain in ruin for more than 120 years in nearbye Yemassee, South Carolina. Its gable roof, pediment, windows, and interior have disappeared, but the classic simplicity of its design still remains. One of the first Greek-Revival structures built in the United States, Prince William’s Parish Church, erected 1745-55, was once one of the most impressive churches in the Province.

During the Revolution, the Patriots are believed to have stored gun powder in it. In 1779, when the British General Augustine Prevost invaded the Lowcountry, the church was burned by a detachment which according to tradition, was commanded by the flamboyant local Tory, Andrew Deveaux. Rebuilt in 1826, the church was again burned by Sherman’s men in 1865. The ruins are nevertheless a picturesque site from which the visitor can visualize the grandeur of the pre-Revolutionary church.