Drew’s Review of Angler Fishing Charter with Outside Hilton Head 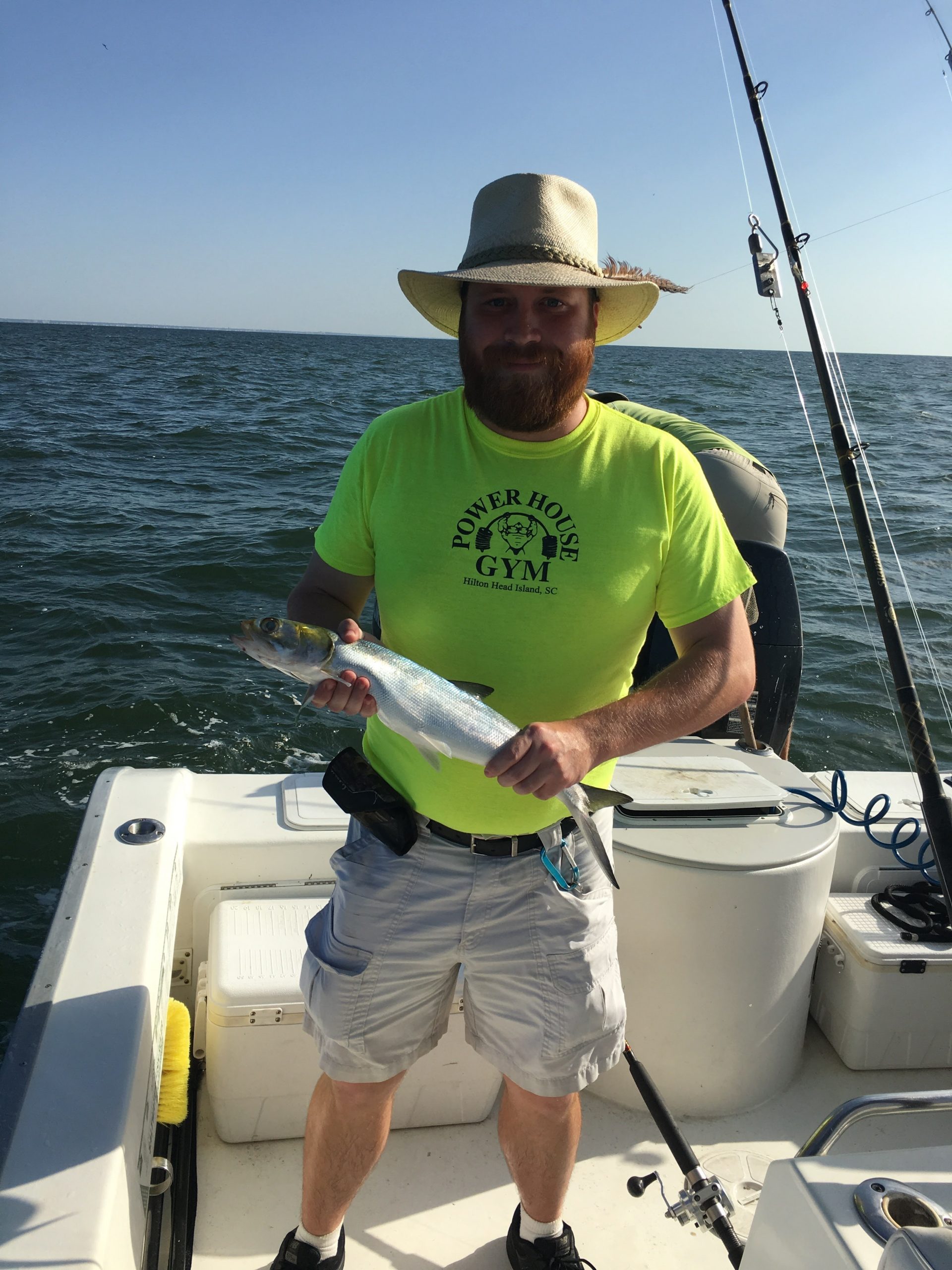 I reserved a morning trip, starting at 7:30 AM, for me and five other people, including my trusty co-worker Ben Preisner. We all met at the Neptune Statue in Shelter Cove at 7:15 AM and initiated our trip at the kiosk next to Ela’s Seaside Grille. Our assigned captain, aka “Capt’n Doug,” had us sign our waivers, and moved us along to the 28-foot vessel known as the “Outside Angler ” for obvious reasons… but we’ll get back to that in a minute!

We went through all the safety and other information formalities as we sailed through the Broad Creek, on-route to the wrecks about 30 miles from the shore. Before we exited the creek, Capt’n Doug threw out his cast net for some “menhaden,” or bait fish in case we were up for some share fishing.

After stocking up on live bait, we continued our journey to the ocean via the Calibogue Sound. The large waves made the boat ride fun – like a roller coaster –  all the way to our first fishing destination.  When the waves were too big, Capt’n Doug would slow up a bit – but he saw we enjoyed riding the waves so he didn’t slow up too much.  But, I am sure he would adjust as necessary for various types of guests. Once we reached our first fishing spot, Capt’n Doug placed dropped some lines and we trolled around for anything that would bite. Trolling is a method of fishing that involves the use of devices called planes that cause some resistance to the lines and keep them submerged at about 10 feet, as we slowly drove around. The lures we used were small saltwater spoon lures.
If a fish struck the lure, the plane would take on a different position and change the resistance so the fishing line would go straight.  Capt’n Doug said that if the fishing pole isn’t straight, then 99% of the time, there isn’t a fish on the line.  Also, when trolling, I learned I did not need to jerk the line to hook a fish.  The fish would hook itself since the lure is moving fast from the speed of the boat.  Using the lessons taught to me, I caught a ladyfish and a crevalle jack.  Some of my fellow adventurers also snagged a small croaker, and even a bluefish.

After a while, we moved on to san area off the shores of Tybee Island, and eventually on to the waters alongside Sea Pines Tower Beach.  You see, Capt’n Doug had caught wind from a fellow Captain over the radio that there was a bunch of Spanish mackerel running in that area. Ben managed to snag a nice looking Spanish mackerel.  A few times the lines looked as if we had something, but it turned out that our planes were dragging along the bottom.

For our trip, we ended up not using the bait fish for sharks, but they didn’t go to waste! We gave our bait fish to another crew who met us just off Harbour Town, on their way out for their trip.

On our way back to shore, we got a glimpse of the “Black Dagger,” a family pirate adventure that I had previously reviewed.  We were also greeted by a dolphin as we entered the Broad Creek on our way back to the marina. No feeding the dolphins, Capt’n Doug declared.  Not only is it a $10k fine, but it also isn’t right.

When we got there, we disembarked on the fueling dock because the low tide did not allow us to return to the point where we boarded. We ended up forgetting our catch, but Capt’n Doug was a hardworking guide and I am sure he had a well-deserved meal of them that evening.  We, on the other hand, just headed over to the Hilton Head Diner for a post-fishing charter lunch.  Five hours out on the boat sure did rev up our appetites!

This was pretty much a learning experience for me. I learned a lot about the art of trolling for fish. I also learned that Capt’n Doug had a friend in Skull Creek that did overnight gulfstream trips for tuna, billfish and mahi mahi – among others – and that his charter was known as the “Pirates Escape.”

We all enjoyed the trip and have fond memories of it. Capt’n Doug was an informative captain and was willing to assist you in any way he could. It is a great day trip, especially if you get as many people as you can (up to 6) to split the cost of the charter. It is always nice to leave a tip, too.  We did.

The price includes everything one needs for a fishing trip:  life jackets, bait, tackle, ice, cold water, a cooler for your cold drinks and another to stash the catch. All you need to bring is sunscreen, shades, a wide brimmed hat – and perhaps a towel because you may get wet. Also bring a camera… who knows what memories you will capture on your angler fishing trip!