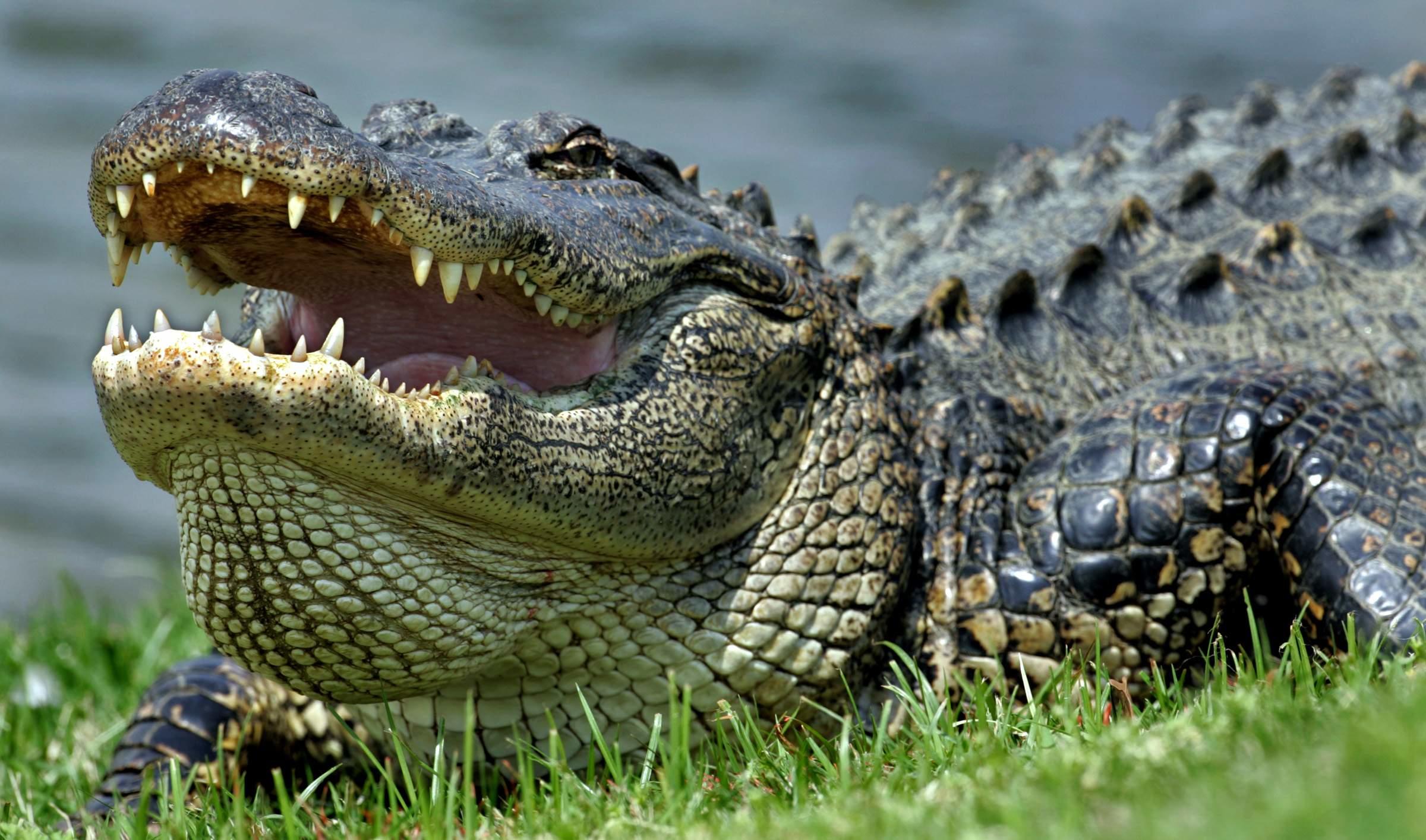 When you ride your bike around Hilton Head Island and pass one of the lagoons, you would most likely see an alligator sunbathing on the bank. These prehistoric lizards have been around 230 million years, truly a living relic of the past. The American Alligator was once declared an endangered species in 1967 and removed from the endangered species list in 1987 after the U.S. Fish and Wildlife Service pronounced a complete recovery of the species. Alligators were once hunted for their hides, but  alligators today are threatened mainly by habitat loss and encounters with people.

The American alligator is the largest reptile in North America, some adults reaching up to 18 ft in length. The gators on Hilton Head Island usually average around 13 feet. An alligator’s tail accounts for half of length. Male alligators, or bulls, are generally larger than females. On average, they weigh from 450 to 600 pounds. Alligators can live 35 to 50 years in the wild. In captivity, 60 to 80 years.

Alligators eat just about anything, including lizards, fish, snakes, turtles, small mammals, birds, crustaceans, and even small alligators. They hunt for prey underwater and often swallow their meal whole.

Spring and fall is the best time for viewing as you’ll find them regulating their body temperature by sunning themselves on the banks of a lagoon. During the heat of a summer day they keep cool by remaining in water with only their eyes and nostrils visible. In cold winter months, alligators will become dormant and hide in mud dens they build at the water’s edge. It’s a spectacular sight to witness when an alligator is out and about, moving from one body of water to another. On odd occasions you can see one walking down the beach or swimming along the ocean shore.
They are not normally aggressive to humans but they can be dangerous if approached or provoked. Be mindful of your children and pets around the lagoons. These animals are lightening quick and incredible fast. They can out run a horse for a short distance. Baby alligators are quite adorable and rather harmless but a mother’s instinct runs fierce so especially stay away from the small ones. Even if you don’t see her she is close by and their relationship can last for up to three years. Alligator attacks are extremely rare and by exercising common sense and caution you won’t have any problems.
Please keep in mind that feeding alligators is highly illegal, please respect the biggest cardinal rule to alligators and that is to never, under any circumstance, ever feed an alligator. The surest way to seal a death sentence for one of these beautiful animals is to feed one. There is an old adage, “if it’s fed, it’s dead”.
By feeding an alligator, it will associate humans with food and become more aggressive in approaching humans. When this happens they will have to be removed and put down. Over the years some of our most prized alligators have met their untimely fate this way. The only caveat to this rule is if you should happen to catch a fish and the alligator wants it, let him have it.